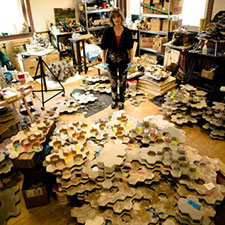 Plato’s Retreat, by Denver artist Susan Meyer, features sculptural works and short videos. Central to this body of work is a looming concrete warren of a structure, at once architectural model and dilapidated ruin. Meyer’s works often suggest sparkling futuristic architectonic utopias, with small details suggestive of discontent. Plato’s Retreat seems to revisit these same environments, after the deluge, to find them sparsely inhabited, overbuilt, abandoned and overgrown - still functioning, though in a manner that seems to favor the individual over the collective.

Brutalist architecture and Corbusier’s machines for living are influences, as much for their mixed public reception as their harsh beauty. Also referenced is Hotel Palenque, Robert Smithson’s 1972 slide lecture to the architecture faculty at the University of Utah; having visited Mexico to see the Mayan ruins at Palenque, Smithson gave a talk instead on the mundane yet beautiful ruin of a hotel in which he stayed. The metaphoric implications of this ramshackle, labyrinthine hotel, simultaneously in renovation and decay haunt Plato’s Retreat.

Additional pieces in the exhibition suggest space-age juxtapositions of the natural and the built environments, while two small videos muse on the transcendent qualities of the mundane.

Alluding to landscape, architecture and folly, Meyer creates visually and metaphorically rich sculptural works that reflect the fluctuations of our culture.