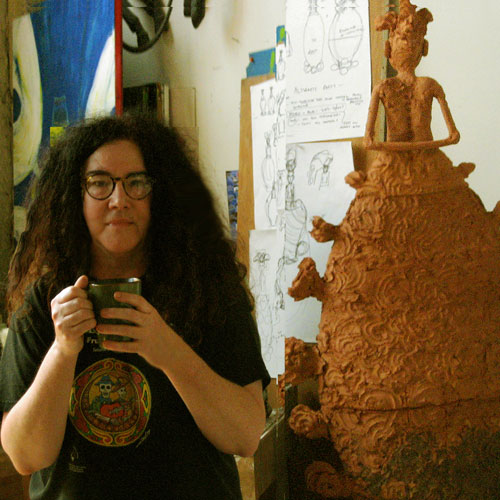 There is an inherent paradox when working with so responsive a material as clay. Traces of touch - fingerprints, knuckle marks - are formed, moment by moment, with relentless fidelity. Such intimate contact of hand and clay remains far beyond the process, beyond even the life of the artist; it is a permanent record of human impermanence.

Susannah Israel is an American contemporary artist, writer and composer living in east Oakland, California. Her sculptures reveal a gritty yet passionate view of humanity, drawn from city life.  She was born in New York and raised by a painter and a writer; as a young student she received a scholarship to Pratt Art Institute to study ceramics with Byron Temple.  She attended San Francisco State University for her B.A., majoring in art and chemistry, and returned to complete an M.F.A. in Ceramics after working independently in her own studio. A teaching artist, she was Professor of sculpture & Ceramics at Laney College, Oakland (2002-2018) and also engaged with diverse communities throughout the western states, giving lectures, workshops and masterclasses. Israel’s expressive work is widely exhibited, appearing in the collections of the Archie Bray Foundation, Auckland Memorial Museum, New Zealand, Mint Museum’s American Ceramics Collection, the Yingge Ceramics Museum, parks and libraries, and many other sites around the world. Selected honors include the Fletcher Challenge Premier Award, a distinction which Israel holds exclusively among US artists, and a Virginia Groot Foundation Award, the Vivika Heino Award, and the 1st Ernie Kim Award. Selected artist residencies include the Archie Bray Foundation, Boise Visiting Artists & Scholars Program, Mission Clay Art & Industry, the Jentel Foundation, Black Bean Studios, San Jose, Sculptor-On-Campus at CSU, Bakersfield, Mendocino Art Center and Pigeon Point, Eureka. At home in Oakland, she works in her studio at the Vulcan Foundry.