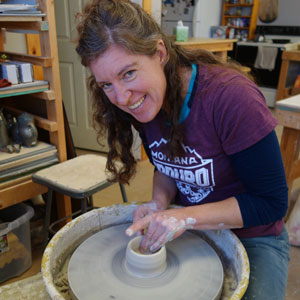 Quiet pots initially speak softly yet reveal complexity in both form and surface through continued investigation and use. Embodied in my wood fired vessels is the serenity that I experience by surrounding myself on a daily basis with a rich natural environment. These situations provide calmness, a physical as well as mental space that allows me to relax, contemplate, and focus on the important details of my life.

The surfaces of the vessels represent the natural world, and the forms often relate to the figure. Pottery’s inherent relationship to the figure is accentuated in my gestural forms. The dialog between the forms changes as the pieces are used.

The simple things in life are often the most important, the great outdoors, the company of my dog, and the beauty of making pots on a daily basis. My pots speak of my passions, while at the same time allowing the user to recognize the important things in their own lives.

Tara Wilson set up her studio in Montana City, Montana in 2008 after finishing residencies at The Archie Bray Foundation and Red Lodge Clay Center. Wilson received a BFA from the University of Tennessee, Knoxville in 2000 and an MFA degree from the University of Florida in 2003. She has given lectures and workshops throughout the United States and her wood-fired utilitarian work has been exhibited internationally. When not working in the studio she can be often be found in the south hills on her mountain bike. She currently has a train and a catenary arch wood fire kiln, a heinz 57 beauty, a very needy mouser, as well as a few chookies.