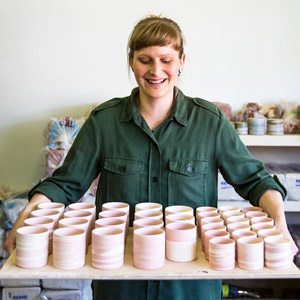 As I find my direction forward as a maker, working everyday with my material and its processes gives me a particular outlook and makes me notice a multitude of subtleties to hone in on and use. The clay after being shaped in a soft a fluid state and hardening allowing for fine tuning, emerges from the final firing transformed into functional vessels. The engaging peculiarities of the materials however make the vessels hover slightly between the everyday and the curious. My pots are complex things to make as they are carefully crafted, and the final objects belie the process in their creation. In my work there is clear references to the earth and landscape through my use of use of particular glazes and clay bodies, and their textures and colours. As in objects in the natural world, the varying characteristics of the pots surfaces and their shifting shapes create changing snapshots. The pots are transformed in each other’s company, and change again from different point of views, as the light shift, or as they are placed in a new environment. They reveal details over time, as the fired materials make you notice new details in surface, texture and colour each time you return to the pots. I balance the familiar with hints of the unexpected, such as carefully constructed lids with exaggerated knobs, or smooth uninterrupted curves of a pot as well as interesting glaze results giving varying textures and tones of colour. It is a world of subtleties that keeps me intrigued by what I do. Small differences between each pot I make inform my making process, and in the end leads to major development over time. The materials with their intriguing surfaces is coupled with the paired back aesthetic to my work. The forms are often minimal, or stylized, as these forms lend themselves to allowing the materials to be showcased.

Swedish-born ceramicist Ulrica Trulsson now living in Australia is known for the restrained minimalist quality of her stoneware vessels. She began to work with ceramics in Melbourne, completing her studies at Holmesglen in 2011. Trulsson relocated to Adelaide the following year to begin an Associateship at JamFactory Contemporary Craft and Design, during which time she received the South Australian Emerging Designer Award. She stayed at the JamFactory as a studio access tenant in the years following. In 2014 ArtStart support from the Australia Council enabled amongst other things a mentorship with renowned ceramicist Kirsten Coelho. Trulsson’s artwork has caught the attention of many curators over the last few years, and she has been involved in a number of exhibitions and awards across Australia. She now works from her home studio in Brisbane. Currently work is underway for her third solo exhibition which will take place at Beaver Galleries in Canberra this May. Trulsson is represented by Sabbia Gallery in Sydney, a gallery specialising in the exhibition and representation of Australia and New Zealand’s foremost contemporary studio glass and ceramic artists.