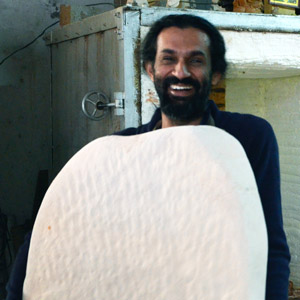 My work draws from the landscape, art and iconography of the Himalayas; from built form that references the sacred, as well as from a personal engagement with Eastern spiritual thought.

Intuitively the works respond to the Himalayan landscape, drawing on a certain sense of self experienced when walking through the mountains and encountering something ancient, mystical, magical and timeless. While the time-worn textures and iconographic markings on the surfaces may appear to reference established traditions, through my working process the text, icons and imagery are remixed and re-contextualized into new works that are symbolic without being derivative, accessible yet also contemplative. The work walks a line between the meditative and the playful, questioning perceived boundaries between Spirit and Matter. Often they are inspired by the phenomenon of street shrines for all over the Indian subcontinent, where associations of faith - often contested - have the ability to transform the meaning of ordinary objects.