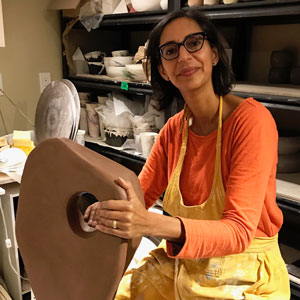 My studio practice engages issues of identity and belonging. Through abstract portraiture, I capture self, an individual, or a culture. I began incorporating photographic imagery on clay in 2014 to viscerally depict the fragmentation of body, and have moved on to explore image as archive. This body of work speaks to my personal histories through photographic imagery coupled with abstract representation. My work is informed by the everyday lived experience of my mixed heritage. In the 19th century, my ancestors travelled from Ireland to Canada and India to the Caribbean in hopes of a better life. In the 1950s, my parents married at a time when interracial marriages were illegal in several American states and extremely uncommon in both Canada and the U.S. I grew up on the East coast of Canada, one of a handful of brown faces in a sea of white, at the corners of “Canadianness.” Holding space and making place for people of color matters. Telling my family’s stories matter.

Building Blocks is an abstract representation of the artist’s personal family histories/herstories that represent pluralist narratives. Each of the larger-than-life slab-built stoneware children’s building block forms interweave archival photography dating back to the mid 19th century from both the Indo-Trinidadian and Irish-American families that came together in the union of the artist’s parents in 1957. They faced many adversities in the name of racism. The stories on these building blocks are the stories of social and political history: Irish settlers who fled the potato famine and low-cast Indians who sailed to the Caribbean to serve as indentured workers, in hopes of a better life.

Postmarked is a series of multiple cast cubes, cut off at odd angles, to form 14-sided tetragons. It speaks directly to the theme of diverse representation by reframing history/herstory. Collectively, the piece literally situates my experience of being Canadian: born and raised as a brown girl, daughter of a mixed couple, in small-town White-Canada, surrounded by the largely Eurocentric iconography of Canada at every turn. As a child, I was unaware of my otherness or the realities of Aboriginal communities in my own backyard. As an adult, the quotidian nature or my racialized experience is all too real. As a woman of colour, I find myself unwittingly relegated to the happenstance spaces formed at the intersection of the mainstream, that is, at the corners of Canadianness.

House of Cards speaks to the precarious nature of my father’s life as an immigrant from Trinidad who came to Canada in the early 1950’s, while simultaneously serving as a metaphor for the fragility of his own human vessel and ongling health struggles. It literally documents through archive the burdens of his story: imprinted with iron-oxide on porcelain ceramic substrate, this “house of cards” relates to themes of fragility, both material and in my father’s life. It references his passion for bridge, and his steadfast dedication to building a home and a life for his family.

Moving Forward is not so much self-portraiture as it is autobiographical depiction of two years of my life, late 2014 to 2016, where the physical limitations of my body due to illness, literally interrupted and constrained my ability to be in the world. The irregular cubes speak to being ‘boxed-in’ with both literal and figurative meanings, and the altered thrown porcelain is a graphic representation of the soul’s ability to ‘emerge’ out of affliction, and seek renewal; find balance and move forward with peace and acceptance.

Body Interrupted: It has become a bit of a living myth in our family, that my father has nine lives. Malaria heart disease, multiple cancers, blood diseases, lung diseases… I have never met anyone with more will to live, and faith in the science we call medicine to support him through disease and affliction. His body has interrupted his life with an unpredictable rhythm, and yet, he is a survivor. It is this sense of self-preservation, drive and passion for life that I set out to document.