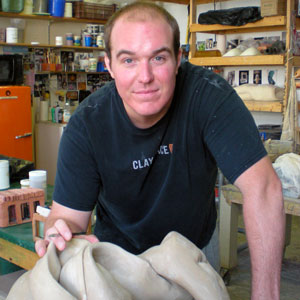 This body of work investigates how the mind collects and organizes fragmented images from memory in order to continuously recreate a sense of history and self. The work manipulates, abstracts, and conceptualizes the body’s material and psychological reality. The intent of my work is to seduce and engage the viewer with temporal surfaces and organic formal abstractions that trigger meditation on the mutability of the mind and body.

Psychological phobias, obsessions, aberrations, and anxieties are communicated through the tension and gesture of my formal language. Certain images and surfaces resonate in my mind and are synthesized into abstract visualizations for my sculptures. These visual references include cropped figurative photographs, scientific medical displays and other images of contortion, deformity and fluidity. This process of organic abstraction uses a vocabulary of reference to the body’s physicality without any literal details.

The physicality of my ceramic process exploits the malleability of clay and its tendency to convey the elasticity and muscularity of the body. The forms themselves are often thrown on the wheel, altered and then assembled to achieve the desired changing repetition of form. Surface treatments range from specially formulated low-fire glazes to atmospheric firings to mixed-media rubber, encaustic and resin applications. To further deny the interpretation of a coherent whole, the exterior of my sculptures are often intentionally irregular and penetrative, creating a temporal experience of the body that is at once internal and external.

The mixed media sculptures he creates incorporate ceramics, fabricated metal, molds, encaustics, rubbers, and resins. The psychologically charged forms communicate an abject and fragmented aspect of the human condition. Hunter’s work has been exhibited in over 170 juried, invitational and solo exhibitions; including galleries across the nation as well as China, Germany, Austria, Croatia, Mexico and Spain. His work has been published in publications such as Ceramics Art and Perception, Ceramics Monthly and other scholarly journals, newspapers and exhibition catalogues.

Reception of the 2011 Al Smith Fellowship from the Kentucky Arts Council enabled Hunter to travel to the People’s Republic of China as a Visiting Artist/Scholar for the West Virginia University’s Ceramics in China Program at the Jingdezhen Ceramic Institute (JCI). The body of work made in China was exhibited in a solo exhibition at JCI and he presented lectures at numerous universities and art centers. Hunter also traveled to Germany to present at a colloquium titled The Figure, Sculpture in Ceramics at the Ceramic Museum Westerwald in Hohr-Grenzhausen, Germany. Work of his was also selected for exhibition in the Museum’s Nassauische Sparkasse 2013 Talent Award for Ceramics, The Figure.

Fascinated with kiln technology, Hunter has constructed several soda, salt, wood and waste vegetable oil burning kilns over the years. Hunter and Markus Urbanik led in the construction of the catenary arch wood kiln at the Watershed Center for Ceramic Art in New Castle, Maine. During the summer of 2012, Hunter led students in the construction of a wood-burning anagama kiln at the University of Kentucky. Hunter has conducted numerous workshops and participated in several residencies at places such as Red Lodge Clay Center in Montana.