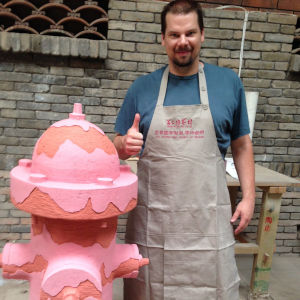 Stone tools (lithics) are some of the oldest surviving artifacts made by pre-humans and humans alike. They are direct evidence of humanity’s drive to make, evolve and survive. I am not attempting to re-create these pre-historic objects verbatim. My intent is to treat those original objects with respect, curiosity and to discuss their importance in relation to human evolution.

As a white man who lives and works amongst Native communities, I am keenly aware of the issue of cultural appropriation and the sacred nature of arrowheads in particular. But humans and pre-humans began making and using stone tools over 2.5 million years ago and the generally accepted time frame for the first settling of the Americas is approximately 14,000 years ago. A difference of well over 2.45 million years. Having said that, I genuinely attempt to not copy existing stone tools and focus on shapes of my own design.

The clay versions that I create are much larger in scale than the originals and tend towards a pixelated surface in an attempt to connect the deep past to present day…getting in touch with both my “caveman” and technology dependent self.

Clay is my chosen medium for both physical and conceptual reasons. On a physical level, clays’ versatility and tactile qualities allow the utilization and construction of nearly any texture or form. Conceptually, clay exists within a geologic time scale that represents billions of years of connected history, as it is literally the broken-down remnants of the earths crust.

This reality allows me to make connections between the deep past (geologic strata & knapped flint texture) and present day (pixelated color patterns) in a way that makes the use of clay not only logical, but vital. This contrast creates connections that span millions of years and brings attention to humanity’s common heritage, uncommon development and shared future in an increasingly technology driven world.

John Zimmerman received his BFA in Ceramics from Bowling Green State University in Ohio and his MFA in Spatial Art from San Jose State University in California. His work has been exhibited nationally in 100+ solo, group, juried and invitational exhibitions. Zimmerman has taught ceramics at the University of Louisville, Florida Atlantic University and is currently a Professor of Fine Art & Director of the Ingham Chapman Gallery at the University of New Mexico- Gallup. He has participated in a variety of artist residencies including a summer residency at the Clay Studio of Missoula (MT), a year-long artist residency at the Houston Center for Contemporary Craft (TX) a summer residency at the Archie Bray Foundation (MT) as an Invited Artist at The Fuping Pottery Village in Fuping China and Artist Invite Artist organizer at Red Lodge Clay Center (MT).