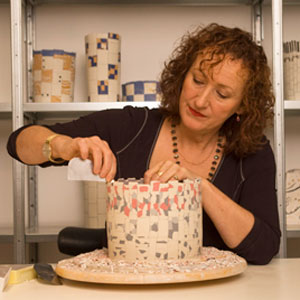 For me, porcelain is a medium that allows me to express what I perceive, feel and experience in everyday life. Through porcelain, I’m able to translate the impressions that stick to me, into my artworks. Happiness, sunsets, rainy days, landscapes that I observe in real life, all find their way to my artworks. The titles are links to my personal memories.

Maria ten Kortenaar lives and works in Amsterdam, the Netherlands.

She was trained as a silver- and goldsmith at the Gerrit Rietveld Academy in Amsterdam and earned her degree as master in 1985 from goldsmith and sculptor Jaap de Vries. Since 1995 she started working with clay because it gives her more possibilities to work with colour. Since 2005 she only works with porcelain. The colours in her porcelain objects are through and through, made with a special inlay technique : Nerikomi.

Her work is all manually built, this makes every example a unique piece of art.

In 2000 she was a member of the Dutch exchange delegation of ceramists who exhibited in Tokoname, Japan. Since 1997 she exhibits in the Netherlands, Germany, Belgium, France,Italy, Japan, Taiwan, South-Korea, China and the USA.

Maria ten Kortenaar is a member of the AIC-IAC, and of the Dutch Ceramists Association NVK.