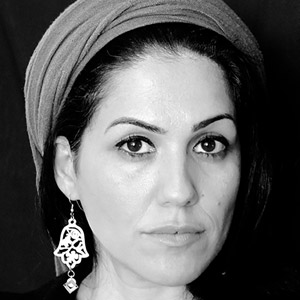 In my current work I synthesize issues regarding society and the human condition from a personal perspective.  Displacement, memory, and the search for cultural identity are all central concerns.  My work utilizes ancient and contemporary technology – ceramics, poetry, ambient sound and video – in a holistic sensory experience.  My upbringing in Iran has given me great appreciation of the potential of clay, both as a plastic material of enormous transformative potential and as a source of metaphorical content for the nature of the human body.  The ability of clay to serve as a venue for images and sound offers tremendous means of didactic and expressive engagement and empowers my art in a serious way to observe the world and make things visible.

The dynamism of my work is vested in the engagement of the viewer in a way that establishes a dialogue through shared experience.  People move today in ways that they have done for centuries but with an unprecedented rapidity.  Many do so without knowing what awaits them either at their destination or along the way.  Coming into contact with others inevitably leaves one changed, either through receptivity or resistance to new ways of living and new perspectives.  It is ironic that in our ultra-connected society, which is saturated with social media and communicative technology, people nonetheless withdraw into pockets of comfort, where individual identity somehow seems to imply that individuals should be identical.  Cultural heritage and social diversity enrich our world, and the recognition and celebration of that variety brings with it the responsibility to understand and respect one another as human beings that all live on a single, fragile planet in the midst of the vast universe.

Raheleh Filsoofi is a multi-disciplinary artist. She utilizes ancient and contemporary art media – ceramics, poetry, ambient sound and video – to make fundamental statements about perception and memory through a holistic sensory experience.  Clay, the ancient medium of her Persian ancestry, is a source of pride and an outlet for metaphorical expression and visual poetry.  Her initial academic training came in Iran, where she also completed several public and private commissions. She moved to the United States in 2003 and worked with several renowned American Ceramic artists on public art projects in Coral Springs and Miami, and she completed a number of important commissions, including in 2010 a work for the Crocker Mansion in Mahwah, New Jersey.  She is an active participant in juried art exhibitions both in Iran and the United States, including the recent International Fair Festival in Tehran (2016) and a solo exhibition at The Cultural Council of Palm Beach in Lake Worth, Florida (2016). She has received several awards including the South Florida Cultural Consortium Award in 2017 and a Dave Bown project award in 2016. Raheleh Filsoofi lives and works between Tehran, Iran, Boca Raton, Florida, U.S.A. and Edinburg, Texas, U.S.A. where she is Assistant Professor of Ceramics in the School of Art at the University of Texas Rio Grande Valley. She holds an M.F.A. in Fine Arts from Florida Atlantic University in Boca Raton, Florida and her B.F.A. in Ceramics from Al-Zahra University in Tehran, Iran.