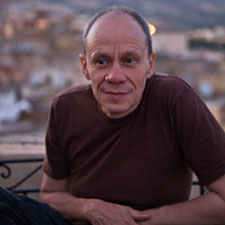 Described by Mick Jagger as an “a very moody piece about the world closing in on you”, Gimme Shelter describes “ a very violent, rough era”. Following in this vein, my work challenges our preconceived notions of the world by visually integrating two disparate interests: industry and the natural world. The sculptures embrace what appear at first to be simple, recognizable objects such as plastic water bottles, car engines, dogs and other animals. These vernacular objects, sometimes reconfigured with new media, or combined with other found materials, are transformed into objects that resonate with more complex associations. The relationship between man and the world is thus described, how one affects the other, how they interact physically and psychologically in a shared space.

Specifically the practice involves identifying images by sorting through diverse source material, ranging in content from the sacred to the profane, then working on paper, both in sheet and book form, and then making and/or fabricating sculpture. This material naturally falls into specific categories, as I am only interested in certain things; my web site is organized in a similar manner. The sculptures are made from ceramic, new or recycled wood, and found objects, and are of medium size often using monochromatic color and thematic repetition.

The word image is used precisely, because an image that resonates beyond itself or connects with other ideas imbues the finished piece with information and perspective. For example, industrial images are connected with animals in my practice, owls on a pallet or dogs made from plywood. The titles that I use are also instructive in connecting the work to other ideas: the original idea for the sculptures of bears came from images of dancing bears and I chose to maintain that reference to the end. In this manner, the work references larger global events, such as trade, the environment, history and warfare, in a realistic manner: ‘mad bull lost its way’.